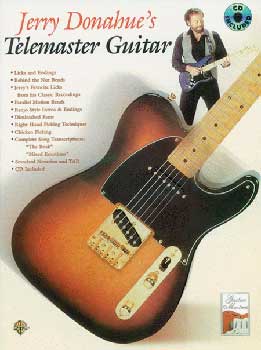 Jerry Donahue is an American guitarist and producer primarily known for his work in the British folk rock scene as a member of Fotheringay and Fairport Convention as well as being a member of the rock guitar trio The Hellecasters. Donahue musically draws from influences of both countries like Celtic music, rock, blues and country.

Technically, Donahue mostly plays in fingerpicking or hybrid picking style with his right hand. However, his left hand technique made him famous among guitar players.

This ‘book’ is more like a sturdy magazine or pamphlet, it’s only got about 25 pages but don’t let that put you off. It illustrates in notation and tab the most important and useful elements of Jerry Donahue’s (impressive) style and, crucially, there’s a CD included that is referenced in the notes by track.

The recordings are of Mr Donahue playing the items in the ‘book’ and explaining the techniques required. There’s a full notation of ‘The Beak’ if you have a year or more to spare and the skills of a demi-God, that alone is worth the price of admission. This could only be better if the bundled disc was a DVD so we could SEE what Mr D is doing.