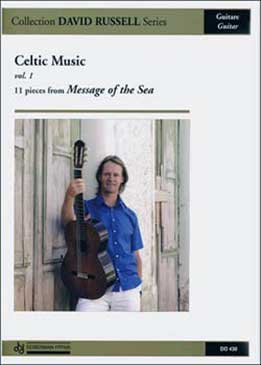 11 pieces from Message of the Sea arranged by David Russell. David Russell is recognised as a master of romantic guitar music, and on this beautiful recording he pays homage to his Celtic roots, with his own arrangements Irish reels, Scottish lullabies, and folk songs.

GRAMMY award winner in 2005 for his CD Aire Latino, in the category of best instrumental soloist in classical music, Classical guitarist David Russell is world renowned for his superb musicianship and inspired artistry, having earned the highest praise from audiences and critics alike.

These are traditional Irish and Celtic tunes, played on the guitar by one of the great guitarists of our generation. Some tunes are familiar, others not, but every note sounds “just right.” A very enjoyable listen from the first. Repeated listenings reveal many subtleties in the music. The skill level of the book is from intermediate to advanced.