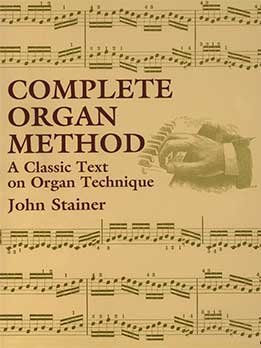 Sir John Stainer is remembered today as a pioneer of English musicology. Beyond his duties as organist of London’s St. Paul’s Cathedral, he was a founder and president of the Musical Association, professor of music at Oxford, vice president of the Royal College of Organists, and later president of both the Plainsong and Medieval Music Society and the London Gregorian Association.

In this highly readable volume, Stainer’s objective was “to place the true principles of organ playing before the beginner,” so that the student would “face at once the special difficulties of the instrument and persevere until they are surmounted.” He begins with a brief history of the instrument followed by an explanation of organ construction, a thorough discussion of the various stops and their management, and a major section devoted to practical study — including detailed pedal technique, precision in manual touch, hand-foot independence, pedal scales, trios, and finger substitution to achieve a perfect legato. With the author’s meticulous explanations and accompanying illustrations, students can actually teach themselves to play.

Sir John’s book, first published in 1877, quickly became the classic for beginners — so popular that publishers Schirmer, Ditson, and Presser each issued its own “Americanized” edition in the early twentieth century. In addition to the seven organ pieces of the original edition, including five of Stainer’s own works and two pieces by Guilmant, three additional works round out this Dover edition.