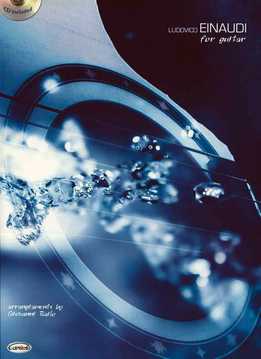 A choice of eight of the most beautiful and famous songs by Ludovico Einaudi, arranged for Guitar by John Bailo, with transcriptions in standard notation and tablature. A CD is included, containing the execution (by John Bailo) of the eight tracks plus a bonus track with a performance of “The Waves” in version 12-string Guitar.

Einaudi’s phenomenal CD sales and ability to sell out major concert halls worldwide are confirmation that he is one of classical music’s most recent success stories. In the mid-1980s he began to search for a more personal expression in a series of works for dance and multimedia, and later for piano.

His music is ambient, meditative and often introspective, drawing on minimalism, world music and contemporary pop. He has made a significant impact in the film world, with four international awards to his name. This book now brings arrangements of some of his most popular works for the guitar